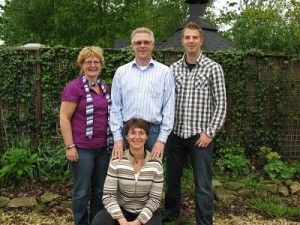 “Given by God”,
translated in Ugandan is “Twawebwa
Mukama”.
This is the name that Ben and Christine Sijbesma gave their
foundation, set up in 2008.

They came into
contact with Uganda in 2005 while orienting themselves as trip leaders for
working holidays. The first group of young people went in August 2007, where
they met Pastor Israel who was their guide. He told them that his father, who had
also been a pastor in his home region, had made one last request on his
deathbed in the spring of that year: he asked his son to “carry on with my
work”. Israel heard and took his father’s words to heart. His faith, dedication
and loving approach to his fellows inspired Ben and Christine to give him all
the support that they can give.

That support has
now taken the form of a new project in Bushenyi, started with Pastor Israel.
Because of the enormous need in the area for good medical care and secondary
schooling, the project is being given all possible room for expansion: it
bought up eleven hectares of land which are now being developed and built on.
The first buildings to go up in among the green hills were a church and a
clinic, followed by a water tank in 2009. Now there are also a secondary school
and a guest house, which accommodates aid workers and working holiday groups
and is equipped with a clean drinking water supply system. In 2012 the next
construction project will start: a building for vocational school.